Citizens of 80 countries can enter Belarus visa-free for up to 5 days through Minsk National Airport, the press service of the President of Belarus reports on 9 January.

Visa-free entry will apply to citizens of 39 European states, including all EU countries, as well as to Brazil, Indonesia, the USA, Japan and other states (see the FULL list bellow).

These are, first of all, countries without migration problems, strategic partners of Belarus and the states that have unilaterally lifted visas for Belarusian citizens.

The new rules also cover such categories of travelers as non-citizens of Latvia and persons without citizenship from Estonia. 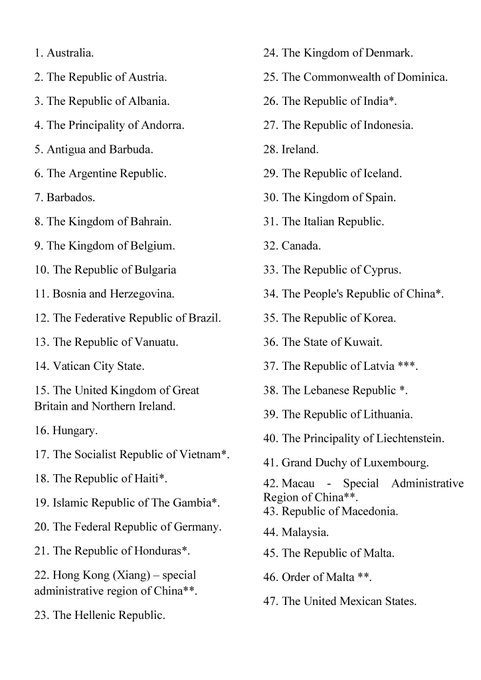 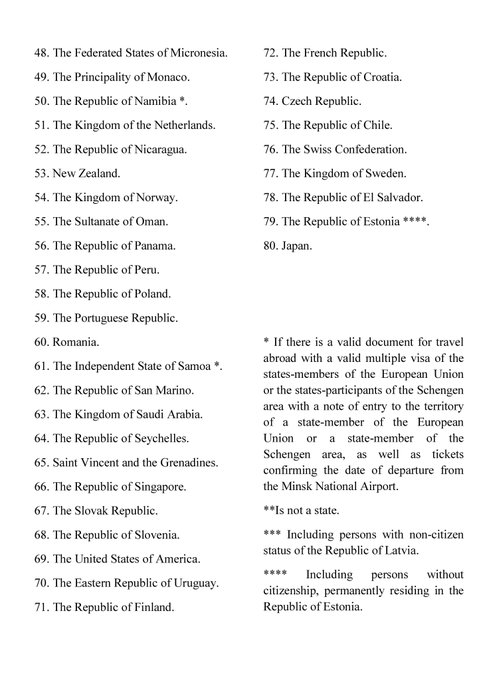 To enter Belarus visa-free, foreigners need to have a valid passport or other travel document, a certain sum of money (equivalent of 2 basic amounts, or 42 Belarusian rubles, for each day of stay), a medical insurance valid in Belarus.

Citizens of Vietnam, Haiti, Gambia, Honduras, India, China, Lebanon, Namibia, Samoa must also have a valid multiple visa to any EU member state or Schengen country with a mark about the entry into their territory, as well as tickets confirming leave from Minsk National airport within 5 days from the date of entry.

Visa-free travel does not apply to persons coming to Belarus with flights from Russia and intending to fly to Russia.

The decree will come into force one month after its official publication.

Belarus has recently lowered the cost of long-term visas for European citizens.

Last year, Belarus continued steps in facilitating visa procedures for foreign tourists. In April it granted visa-free entry for citizens of the UAE; in August to Chinese tourists arriving in groups. In the end of November, visa-free trips to Belarus opened for Brazilian citizens. In October 2016, the Augustow Canal park in Hrodna region became visa-free for visits lasting up to 5 days, which has attracted tourists from over 20 countries.

* If there is a valid document for travel abroad with a valid multiple visa of the states-members of the European Union or the states-participants of the Schengen area with a note of entry to the territory of a state-member of the European Union or a state-member of the Schengen area, as well as tickets confirming the date of departure from the Minsk National Airport.

*** Including persons with non-citizen status of the Republic of Latvia.

**** Including persons without citizenship, permanently residing in Estonia.